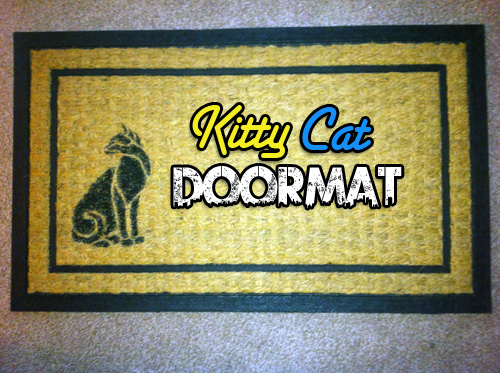 I have a super cute doormat idea for you to try! Don’t you just hate it when cute doormats cost so much money? I mean, aren’t we just smearing dirt and nasty remnants of all that lurks outside onto this mat? Irregardless of what ends up on the mat I want to have a say on what starts on the mat.

And that my friends is why going all DIY on you is completely the grooviest thing I’ve done. I love not being pushed into a design just because Target says so. I’m not hatin’ on Tar(jay) I’m just saying let’s get crafty!

You may already know about this cute little outdoor mat at Walmart for under $7 bucks but if you don’t then I’m about to rock your world or at least your front door. 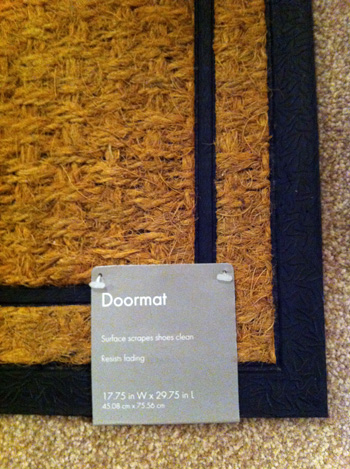 I wrestled with the options. Stencil an initial? What font? How big? I’m terrible at making decisions. But then I looked at my little helper, Sofia, our Blue Russian, and I knew. Before Sofia, I was strictly a dog person but my baby girl has been with me through 7 moves, too many breakups, and a few colds over the last 10 years and I can truly say I’m a Blue Russian person. This breed is exceptional. Beautiful, sweet, calming, smart, and very dog-like. There isn’t a day that goes by that she isn’t waiting right by the door when I come home. She’s been a good friend to me.

I knew I wanted to stencil a cat in black but finding the right kind of cat well that was a little more difficult. I wanted the stencil to resemble Sofia. I think I nailed it! 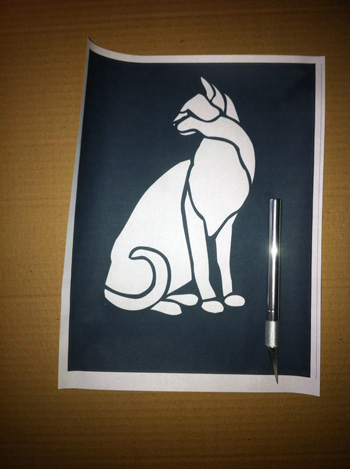 After finding the image online I opened up Photoshop and inverted my image and used my exacto knife to cut out the “negative space” or where the black paint would go once the stencil was on the mat. Ok, as you can see this was a tad bit intricate. Believe me 1/3 of the way in and I was wishing I’d just printed out the letter “L”. 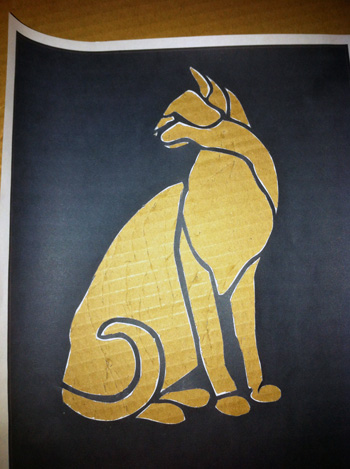 I decided on the off-centered look for two reasons. The first reason was because it just felt better off center and the second reason was because I wasn’t sure how well the black craft (acrylic) paint would hold up under excessive traffic. After I was satisfied with my cuts I laid it out on the mat. Using a black sharpie I traced the outline of each negative space that I needed to paint black. 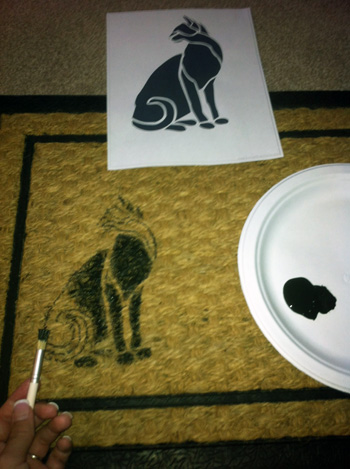 After a certain point my stencil brush (I used the stencil brush set from Martha Stewart found at Michaels) was too big to get into the details. I immediately pulled out some soft bristled artist’s brushes but then realized that it wouldn’t work on the mat’s rough surface. I returned to my stencil with a Q-tip and I firmly tapped the paint into the mat and it worked like a charm! For the tough areas like the face I used a black sharpie marker. 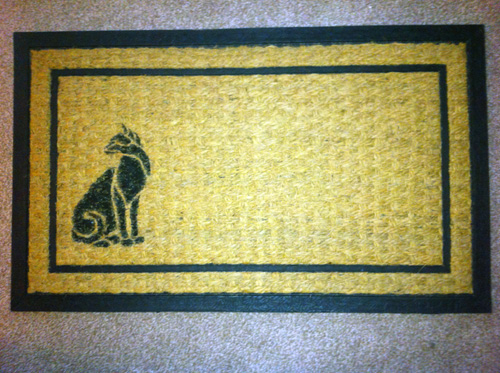 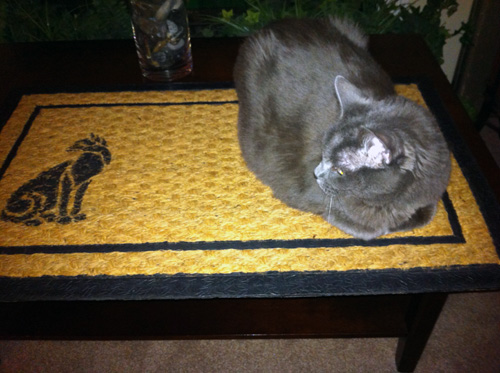 Even though the mat was still drying, Sofia couldn’t resist checking it out! Isn’t it cute that both cats are looking in the same direction?!

What do you think? If you were going to personalize your front doormat, what stencil would you use?

Gettin’ down with my bad self at these link parties!