It was bound to happen. Being famous that is. I’m just that kind of person. Interesting, fairly witty, and a smidge from joining Mensa (you know that genius club). How could I not be famous.

So when Heather Mann contacted me many moons ago about featuring me in her upcoming book it was no surprise.

Heather did want to feature me in her newly released book called Craft Fail: When Homemade Goes Horribly Wrong.

Remember when I wrote about my Penny Bowl Fail? It’s been a huge hit over the web. And now it’s in a real book with real paper and everything. So, I guess I’m like, published. And I couldn’t be more proud of my fail.

As a contributor I was given a copy to review. And here’s my review, yo.

Page 13 is probably the best page in the entire book. 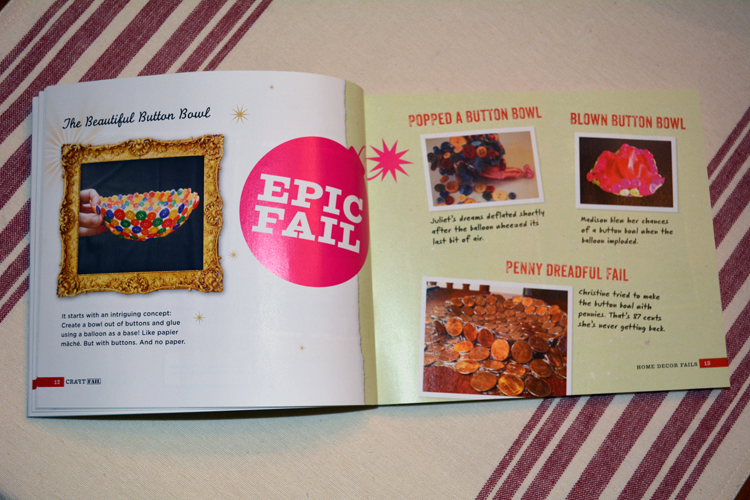 Anyone recognize that failed attempt at making a bowl from pennies? Yep, that’s from yours truly.

The whole idea of exposing the blemish free Pinterest was totally appealing to me. I mean let’s get real. Thankfully I’ve had a few more craft successes than craft fails but it was very comforting to read about how others failed so brilliantly.

Heather exposes our defeats by first showing the Pinterest inspiration (see the button bowl on the left in the photo above) and then shows us a couple of craft failed attempts at Pinterest perfection. Totally witty descriptions beneath each failure just makes this book a fun read and a great reminder that we won’t always get it right and that’s alright.

Ok, let’s talk about the book quality. I’ll be the first to admit I’m totally weird when it comes to the texture of books. I will feel a book and if the cover or the pages feel gritty, I probably won’t get it. This might sound crazy but think about it. Publishers want to capture our sense of imagination with their prose but shouldn’t they also be concerned with the quality of the paper that I’ll have to feel for hours or days while I give my imagination a go?

Kuddos to Workman Publishing for totally getting this right. The book is an atypical size which I love, the paper is glossy, and heavy, all of which hints at great quality.

And because someone else’s description is way more colorful than I could create I thought I would add it here for you:

CRAFTFAIL (Workman; November 2014) illustrates the hilariously gruesome underbelly of the creative process. Inspired by her own craft experiences, Heather gathered real-life home decor fails, fashion fails, holiday fails, food fails, kid crafting fails, and best of all—EPIC fails (those projects that are so inspiring that they are attempted again and again by members of the crafty tribe to, quite frankly, disastrous results)! Filled with over 100 full-color photographs of the hoped-for outcome and the underwhelming reality (plus captions pointing out what went wrong), these embarrassing and often pathetic crafting attempts are the stuff that gets the “A for Effort” and LOL for outcome.

But amidst all the terrible failure is a celebration of those among us who are brave enough to pick up the scissors and get crafty! Because even if you can’t make a handsome Papier mâché stag to hang on your wall, why shouldn’t you try? As Heather says, you learn more from trying and failing than not trying at all. And when it does go wrong—as it inevitably will—you can always find solace in sitting back and laughing at the ridiculous results. As one anonymous crafter said: “It wasn’t supposed to end this way.” Luckily for us, it did. 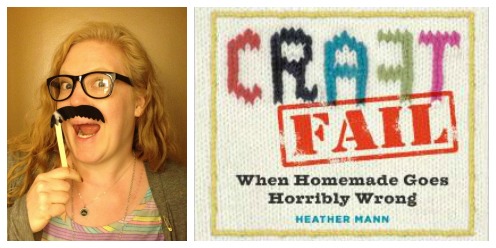 Heather Mann, the founder of CraftFail.com and DollarStoreCrafts.com, has been crafting with middling success all her life, but blogging expertly since 2000. She is also cofounder of The Blueprint Social, a social media consulting company and network of influential bloggers, and cohost of the web show Get a Little Creative. She lives and crafts in Salem, Oregon.

I hope you get a chance to check out Craft Fail and in the meantime keep on crafting!